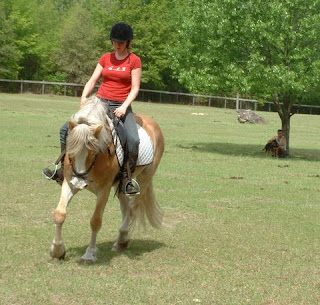 Bodhi Has been improving with keeping a bend and not falling into the inside. Probably as I am doing better about not dropping my outside rein. It is amazing that he so green yet most of our problems can be solved with a change in my equitation. Like he is just waiting for me to get with the program! Like when I don't have my elbows bent he just fusses and fusses and then the light bulb goes on in my head and I fix it and he just drops into the bit and drives forward from behind. I can just hear him say "finally idiot! I was wondering when you were going to fix that" Sometimes I wonder who is training who.
Jumping is another story. Poor Bodhi. He just doesn't get it. I have never trained a horse to jump that is so naturally ungifted before. He either falls over it or runs through it. This is the first time since I got him that I miss owning a big Thoroughbred. Yesterday I schooled him over this little oxer (I mean baby tiny). He was doing better and relaxing his back so I gave him alot of rein and the little booger tried to refuse! I of course went into hunter training mode and schooled him over the fence several more times, but it broke my heart to feel him bouncing against my legs wanting to evade. How can he be sooo bad and sooo unwilling. I stopped him after a bit and realized how much he was blowing. He was completely spent. I felt horrible. No wonder he had started to try and refuse I was over working him. What would have been super easy task for a big Thoroughbred is really hard for my little haflinger. I should not have pushed him so hard. I need to sit back and figure out a new strategy to get him more confident over fences while challenging him enough that he takes an interest. I need to possibly take some over fences lessons my self.
Posted by Golden the Pony Girl at 5:59 AM 1 comment:

Show Name for the Bodhster

Behind the Bit inspired me to think about what I am going to show Bodhi as. I need to decide soon as our first ever dressage schooling show will be July 18th! (yes I am having a panic attack)
Something cute? Something serious?
First off since he is not registered is it acceptable to show him as anything other than his regular barn name? I have always just *picked* a show name for unregistered horses but maybe that is tacky or not appropriate?
I was going to use as Golden the Pony Boy as a reference to the movie the Science of Sleep though Behind the Bit's post on show names made me think twice.

My Ideas so far..

Pleas any ideas would be great. I want something simple.
Posted by Golden the Pony Girl at 7:22 AM 3 comments:

This weekend was full of equine eventfulness...
First off-
Went to look at the Haflinger Mare Sasha. I was very impressed with the sellers farm, horses and ethics. It is always nice to meet a horse owner with simular morals to your own. She has Sasha because she was a previous rescue of her's whom she placed in a home once already. She took Sasha back when the man she adopted out to lost his job. She informed me that she always does that for any of the horses she rescues or breeds. Good for her!
Sasha on the other hand was not what I expected. She was way more stocky/drafty then I thought from the pictures and her movement and conformation was not what I was looking for in a new sport pony prospect. I am starting to think I really lucked out with Bodhi as I have not met a haflinger I like more (biased I know!!)
I really wish I could still help find Sasha a home though. She was super sweet and intelligent and would make a good kids horse or novice trail mount with training of course. I hope to network around to help find her a good home. She deserves it and so does who wonderful rescuer.
Second off-
I then went to visit a new Barn for Bodhi.
Since there has been some strangeness at Bodhi's current home I started shopping around for a new boarding location and found an excellent one! It is much closer to where I live (5 miles opposed to 16) has many more amenities and is run by a friend of a friend who has a great reputation. I am very excited. When I visited it I loved it even more. Lots of pasture, lots of shade and a great atmosphere. All it is missing is one mischievous haflinger
Posted by Golden the Pony Girl at 9:22 AM 2 comments:

To treat or not to treat?

I was listening to horse radio today at work when they had a great interview with trainer Julie Goodnight. Though I am not a die hard fan of any one natural horsemanship trainer or method I do like the trend towards gentler methods of horse training-using brains over bronze. I thought she sounds like someone I would like to look into more. She doesn’t promote any gadgets or games (at least not in the interview) she seemed down to earth and full of common sense. What I find appealing.

We do disagree so far on one subject though…Julie Goodnight adamantly opposes giving treats. As I understand it she believes that giving food from the hand is compromising your dominant standing in you and your horse’s relationship. Her explanation was simple and satisfying. Horses show dominance in the control of resources. We all know more dominant horses take food away from less dominant animals. She explains that allowing horses to take food from us is giving them the wrong idea. This I thought was a valid explanation for the camp of horse people against giving horses treats. I have heard since I was a small child that giving ponies food from your hand will make that pony a biter. We were never allowed to give biters food from our hands at my childhood barn as it was thought to encourage them. I think it probably does.

I am a reluctant treat-er. I believe that giving treats to horses “for no reason” could very well encourage aggressive behaviors. I also agree “in your pocket” horses are not cute they are a biter waiting to happen. I do not think that giving your horse a treat as a reward however is the same thing as giving him treats randomly or because he is a “pretty boy”.

My reasoning is this; Treats given as rewards for desired behaviors become reinforces. They are a training tool just as much as your reins and your spurs are. When you stop squeezing your legs when your horse moves forward that is negative reinforcement. Most of our training uses this method. You take away a stimulus that is unpleasant when the horse exhibits a positive behavior. Giving a food reward when you horse gets in a trailer is a positive reinforcer. You give something pleasant to a horse when he exhibits a behavior you desire. If your reward is appropriately timed it will almost guarantee that the behavior will become more frequent. Positive reinforcement is a powerful thing. It is how Shamoo and most other wildlife actors learn. We train dogs this way-even though they also display dominance by taking food from subordinates.

Bodhi was a biter when I got him. In fact he bit my husband the first time I went to look him. I decided through a lot research to try treats as a training tool anyways. Is he stilly mouthy? Yes. But he has gotten much better not worse as would be predicted by the absolutely no hand feeding crowd.

Going to look at Sasha the hafllinger tomorow!!!

I decided to start this blog because I am playing with the idea of getting a second Haflinger as a project. She is a 13 hand mare named Sasha. I don't think "playing with" is the correct phrase so much as careening towards. I had no plans of getting a second horse but there she was on craigs list for 500 dollars just screaming to me to be upgraded. My trainer and I are going to look out her this Saturday. My husband is ready to strangle me.
http://ocala.craigslist.org/grd/1215050171.html
So here it is...
FOR
-I just trained a four year old of the same breed. I am fresh on all the basics and feeling relatively confident I can repeat the feat.
-I have a great trainer as a resource and support group
-She is most likely going to stay pony sized which is better than Bodhi who has to be 14'3 or larger by now
-I am connected to the Haflinger and youth hunter community. I should be able to re home her when she is ready for a career.
-She is unstarted so this should mean a clean slate.
AGAINST
-She is a mare. I have never really owned a mare and usually do not get along with them as well. I do not know if this is a valid concern
-The economy
-Her background is questionable. Just because she has not been started doesn't mean she has not already been jaded by some ignoramus.
-I am going to Graduate school in about one year. That should give me plenty of time to put 90 days on her and get her on the trails and to local shows but you should always think about the what if's. So I am.

I think this is a battle of conscience. I hate to buy an animal I am planning on re homing. It makes me feel bad. On the other hand though her current situation sucks and she has absolutely no training or skills. If I could give her some of those I am increasing her chances of having a long happy fat haflinger life.

In the end it will all depend on how I like her on Saturday.
Posted by Golden the Pony Girl at 5:36 AM 2 comments: 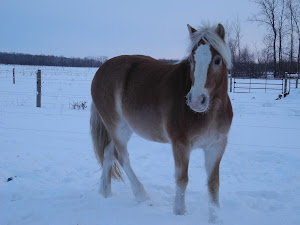 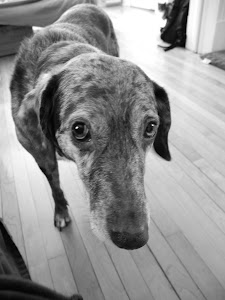 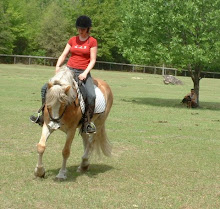